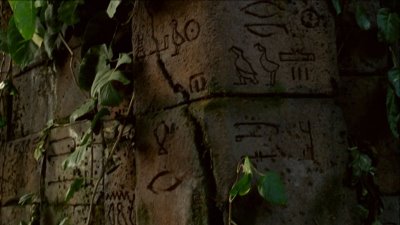 It’s late, but I managed to write a few quick thoughts on this week’s LOST episode, “This Place is Death”:

Jin’s finding the music box that Robert gave Danielle is reminiscent of the glass ballerina Sun breaks in… uh, “The Glass Ballerina.”

Wow, confirmation that DANIELLE has simply been cra this whole time?!!

Charlotte pointing out that she also speaks Klingon a shout-out to the most sci fi show there IS, Star Trek.

Fictional band Geronimo Jackson is referenced for the millionth time

The fact that Charlotte’s mother tells Charlotte that the island wasn’t real and was made it up like Oz. In Return to Oz, Aunt Em tried to convince Dorothy she’d made up her trip to Oz.

I’m so glad there was a meat cleaver conveniently located near the well for Jin‘s convenience when he threatens Locke not to bring back Sun.

What’s up with the way Daniel dresses? Seriously. He’s so hipster with that skinny tie, it’s hard to believe he’s on the island and not in Williamsburg.

I don’t believe Locke is dead. Like Tony Almeida on 24, I’ll believe it when I see his BONES.