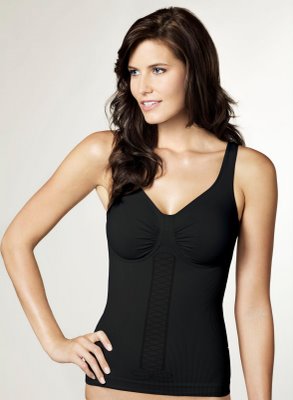 As a fellow financial writer with a spending habit, I’m counting the days till Confessions of a Shopaholic comes out. I also love that Isla Fischer. I’d go so far as to say she’s the best looking redhead in Hollywood. She makes ME want to dye my hair an earthy auburn hue. Anywho, I need to report that Miss Isla has confessed that shapewear, along with a rigorous training routine, allowed her to slip into form-fitting clothes for the movie only months after giving birth. Sassybax Shapewear, known for its seamless bras that eliminate back fat, plays a critical role in the fictional Rebecca Bloomwood’s wardrobe.

Although Fisher has a naturally petite frame, she also has naturally feminine curves that Sassybax shapers flatter though problem-solution approaches to design. Fisher’s charisma and fantastic fashions created by Hollywood costumer Patricia Field steal the show in “Shopaholic,” but the brand’s creator Amanda Kennedy thinks that Sassybax’s supporting role in the film will also earn women’s applause.
Pictured above is the Sassybax Torso Trim in Black ($68).

1 Comment → Isla Rocks Sassybax in Confessions of a Shopaholic