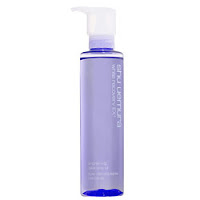 Shu Uemura Brightening Cleansing Oil ($35)
Shu Uemura is credited by W Magazine as being one of the first to experiment with cleansing oils. Having created his Classic High Performance Cleansing Oil in 1960, with fans such as Marilyn Monroe and Elizabeth Taylor, the brand then went on to develop a full range of cleansing oils.

I am especially enchanted with the Brightening one. It removes even waterproof makeup in a flash without stripping skin of moisture and leaves my skin softer than ush. I was initially hesitant to put OIL on my face which has a tendency to break out, but the effect was calming and there are no spots (as Brits say) to speak of.

Do as Marilyn did. That’s the motto by which everyone should live, n’est-ce pas?