Dolls, if you’re not into Twilight, I’m just SORRY this week because it’s ALL I can talk about. As you probably know, when I’m into something, I’m INTO something. I read all about it. I buy all the paraphernalia. I bring it up out of the clear blue sky at dinner parties. It doesn’t happen often, but when it does, it’s all-consuming. I haven’t had such a case of the vapors over a fictional dude since watching Michael Vartan play Michael Vaugn in Alias last January. And before that, it was LOST, but mostly LOST‘s Dr. Jack Shepard (played by Matthew Fox). I truly have a thing for male figments of JJ Abrams’ imagination. Well, let’s be serious, I’m STILL 100% consumed with LOST, but this week (and probably next week, leading up to the November 21st premiere, to which I’ve already purchased tickets on Fandango) it’s all Twilight all the time. Let’s learn how to achieve a dazzling glow a la Edward in the meadow, shall we? Two products come to mind. 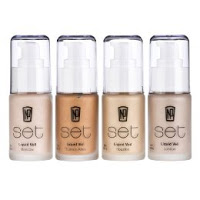 NP Set Liquid Veil ($15)
I love the pearlescent quality of this highlighter when combined with a drop of foundation. It’s also phenom when used on the bridge of the nose and on the brow bone. Its anti-oxidant rich pomegranate extract protects skin as an added bonus. Be gleamy!

ModelCO Luminosity Shimmer Stick ($28)
Like Napoleon Perdis, creator of NP Set, ModelCO’s founder Shelley Barrett also hails from Australia. Use this Shimmer Stick and be the mayor of Luminah City. Get it? I lurve it for decorating eyes, lips and décolletage with a shimmery peachy pink. It provides a sexy flush of color for a healthy, rosy complexion that compliments any skin tone. Best of all? ModelCo Luminosity Shimmer Stick is an oil-free formulation that doesn’t clog pores. You’ll adore it.

P.S. Just TRY to be productive today with this link to 93 pics I found of the movie here. As my gal Daneen says, can you not hang OFF of Robert Pattinson‘s cheekbones?

3 Comments → Dazzle Like Edward in the Meadow with These Products