That’s a pic of my friend Ji (short for Jill) and me at Coffee Bean and Tea Leaf in L.A.(I’m on the left).

So I TOTALLY don’t intend to alienate any of my L.A. readers (hi dolls!), but I once read a book that described L.A. as “the shortest joke in the world” and I have to say that I agree. Don’t get me wrong, I love the weather, the sites, the Reg Bev Wil, the celeb sightings, the dining (even though J, L, and I were the only ones EATING)… but it’s so not ME there. I’m kind of… insulted that several people informed me prior to my departure that I’d want to RESIDE in L.A. once I’d visited. I just talked to my friend Justin from college who was considering moving there (he’s now moving to Korea instead, I’ve never been THERE, but think it’s a good move) and he said after a recent visit to NYC that it’s not for him, too much “walking, drinking and eating”. Well, NONE of those things go on in L.A. And yet, L, J, and I had a TON of fun. We ate at The Ivy by accident where we had the AUDAC to order bread, went to a house party at 1am, loved that you could ALWAYS get a sandwich on whole wheat, listened to tons of West Coast rap (my fave part about Cali), took day trips to Santa Barbara, Laguna Beach (had the best pedi of my life at THE salon where Alex H, Alex M, Jessica AND Kristin go), Santa Monica, and La Jolla, shopped on Melrose (“Amber and I are going to Melrose”), and quoted movies at a rate that can only be paralleled by a BOY. Namely, my friend Mitch. The following were the most uttered phrases:
“Excuse me Miss DIONNE” Clueless (said when searching for deo, or deodorant… you know, because deo sounds like Dionne)
“I would never eat here.” Swingers
“I’m ABOVE Olympic.” (said every single time we drove on or past Olympic) Clueless
“Why bother? Everywhere you go has valet.” Clueless
“That’s where Brenda and Dylan….” 90210
“What’s your dream?” Pretty Woman
“Is he brown? Is he clean? If he’s clean, let him in.” Swingers
“Looks like we’re making a cameo at the val party” (used anytime the valley was mentioned) Clueless

Loved San Diego where we made some Italian friends (don’t be surprised if the term “stu” becomes HUGE in Milan), and finished off the trip sitting by the pool in Cabo. Am currently back in my fave city in the world with my fantastic tan and a couple extra pounds from the lack of WALKING and am starving them off as we speak (looks like a bit of L.A. did trickle into the Fabulista’s lifestyle!).

In my suitcase,”LINT-ON-THE-GO-SHEETS!” saved my LIFE. My 10-day suitcase weighed just under 50 lbs (the limit) so I tried to pack travel-sized stuff whenever I could and these sheets fit the description. They are
portable and disposable and take up far less room than a full-sized lint roller. Here are the deets (the last one is my fave, obv).

Oh, and before I go… I HAD to take a pic with Noah from 90210 at a bar in L.A. Let’s be serious. And if you don’t think I asked him if how things were going at the Peach Pit After Dark, then you don’t know me at ALL. 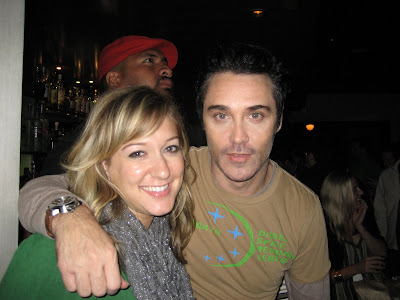