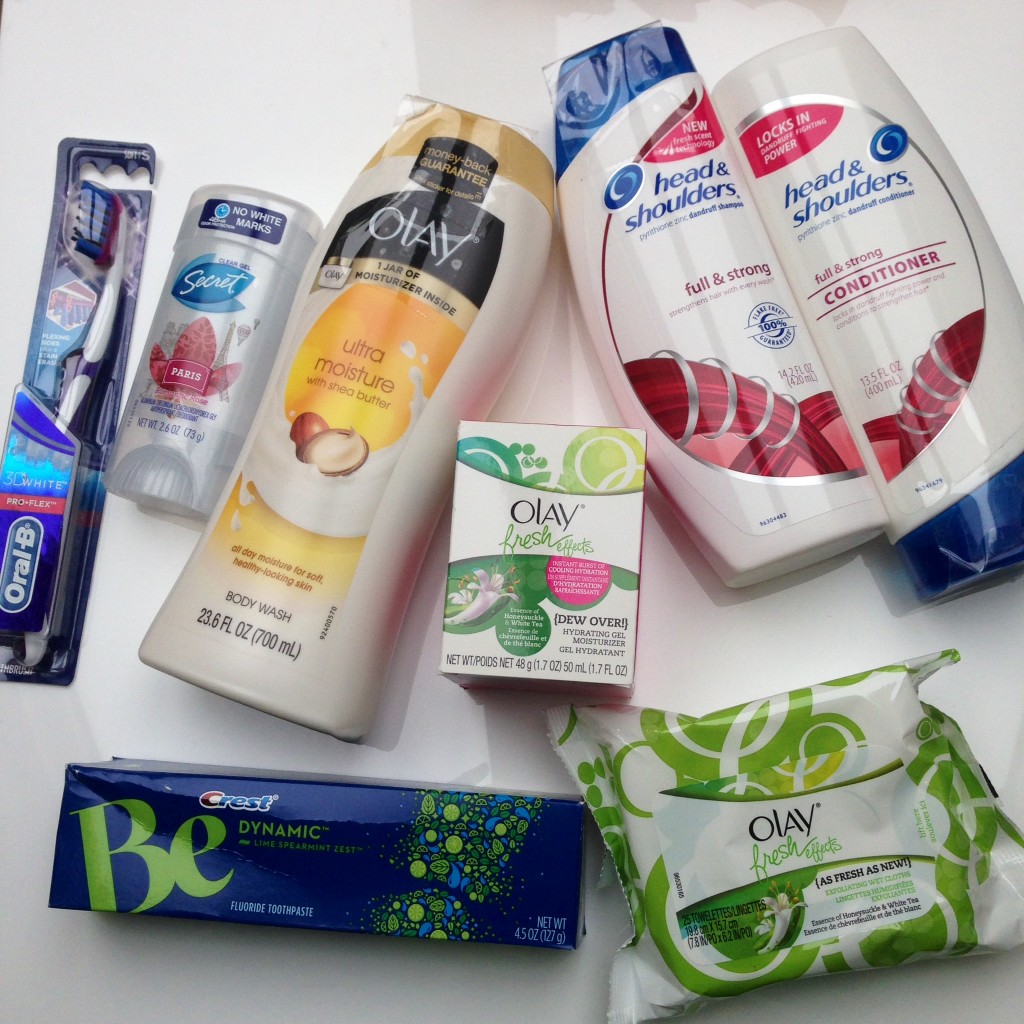 The giveaway items one lucky US winner will get! The latest toothbrush from Oral B, Secret Paris deodorant, my VERY favorite Olay Ultra Moisture Body Wash, Olay Fresh Effects Dew Over, Head & Shoulders Full & Strong Shampoo/Conditioner. See entry rules at the bottom of this post.

Few things make me spring out of bed on a Saturday at the ripe hour of 7am, but discussing some of my favorite P&G beauty items to hit the market with Under The Gunn/Project Runway’s Tim Gunn is very high on the list. The man is truly a class act. He was everything I thought he’d be and so much more, with that signature formality that is refreshing like cilantro. In fact, I urge you to listen to his recent NPR interview with Terry Gross, which my friend Leah told me to listen to after I’d met the fashion guru. You may not realize that he had quite a difficult adolescence which included a suicide attempt that put him in a hospital for two years. And in a small-world twist of fate? The doctor he credits with staying with him after a few others gave up on him is my cousin’s ex-husband, Phil. Obviously, Carol and I have been obsessed with this news all week (Phil is actually Carol’s cousin’s ex-husband, i.e., my second cousin’s ex-husband and Carol is a giant Tim Gunn fan). We haven’t seen him in years, though he talks to my grandmother regularly and I’m delighted that he had such a profound impact on someone who went on to have an incredible effect on others. Here, Tim’s best tips on fashion, his high and low points working on Project Runway, the trend he’s horrified to see has come back already, and more.  Plus, a giveaway of items to help you look fabulous this spring and save on new must-haves from Olay, Crest, and Head & Shoulders at Walgreens at the end of the post. The wonderful thing about American fashion in particular, and I’m speaking as an old fogey here, is that it used to be so narrowly defined as an aesthetic swath. The first thing you notice about a person is their gender, then their clothes, then grooming. It’s that whole head-to-toe look. You do send a message. I don’t care how you’re dressed or groomed, accept responsibility for it. Don’t let this intimidate you. I’m the anti-trend guy. The trend is only good if it works for you. For instance, I’m horrified that the gladiator sandal is back. I was on “Good Morning America” with Nina Garcia and Nina declared the gladiator sandal was the one thing to run out and buy this season and I had this visceral reaction. Most women don’t have time in their lives to lace the thing up. It has to work for you. Be who you are.

What are some tips for a fashion novice to creating the best look possible?

It can be useful when a person feels at sea to have a fashion mentor.  That person should have your coloring and physique to help you out. The key to getting our fashion right is three principles: Silhouette, proportion and fit. When they’re in balance you look great. Silhouette is your shape. Show off curves! Be female, show it off. Proportion: Look at yourself as a series of thirds from your shoulders to your toes. A dress is 2/3 on top, 1 on bottom. top and pair of pants is 1/3 on top, 2 on bottom. That’s why men look schlubby with their shirt tails out. Fit: Have clothes that skim you. Not too tight, not too much volume.  If you’re going for separates: Slimness in one and volume in the other for counterpoint. Let your viscera speak to you. If your viscera is saying I don’t know about this, your viscera’s probably right. I’m all for make-betters instead of makeovers. If the person doesn’t feel the new look? Get it off. Some women look a little wacky, but it suits them! I can’t extract the clothing from who’s wearing it on a red carpet when I’m asked to comment. For example, Tilda Swinton in that long black Lanvin. I got in an friendly argument with Stacy London about her. Would I put that look on Sally Field? Of course not. But that look told you everything you needed to know about her. I wouln’t wear any of it so I don’t project myself into it, which women can do.

How about some tips for men?

Have a suit and a tie. I can’t tell you how many men in new york don’t have a suit and never worn a tie. It’s about respect, for yourself and everyone else. Providing the fit is correct, which is a whole other issue with men (so many wear too big clothes), what man doesn’t look great in a suit? I mean, look at James Gandalfini. Size doesn’t even matter. My advice policy is that if it’s something you can fix, I’ll talk to you about it. If it’s something you can’t do anything about, I don’t talk about it. If you have spinach in your teeth, I’ll tell you. If we’re presenting at an awards ceremony and I hate your outfit, why say anything? It’ll just erode your confidence.

What entertaining moments should viewers look out for in your new show, Under the Gunn?

It was a wonderful experience to make the show. The primary reason is the executive producer Sara Rea and I come from the same school of thought. You see what happens. You don’t tamper with it. Networks get nervous about that. And we constantly turned to each other and said you can’t make this stuff up! What an arc. The mentors are a roller coaster. You’ll see a giant outburst from me. I lost it at a certain point. I want the designers to succeed! One such designer was derailing him/herself, but I felt the mentor was supporting it. This will not be well received by the judges, this could send this designer home. So stop it. And it was makeup related! Be on the lookout for it.

What advice can you share for those entering the world of fashion advice?

Have an unbridled passion for it. It’s a daunting industry. It’s the love that will keep you in it. You have to be a Weebl. If you’re knocked over, you get back up. Have a tough skin. You can be a sensitive little marshmallow, but you need a thick crust. I believe that’s acquired. No one comes with it. Have a point of view and know who you are. Don’t look at the shows and be like, I’ll do that. That makes you a brand. People say that word is overused, but it’s a potent one. It’s your DNA! It’s about passion in love, which is true of everything in love.

How does it feel to coin a phrase?

I used “Make it work!” in my classes for years. The first season, I didn’t even think I’d be in the edit. I was a consultant. I was never intended to be on the show. I said, do I have to live with them? when I was asked to be a part of this whole production and the director said no, so I agreed to do it. No one ever said this, but I deduced that during that interim period when the designers are working, no one would talk, so I would assure some dialogue. I thought no one needs to see me, hear my voice! I was incredibly surprised when I was in it. Who knew there would be a season 2 let alone a 13? I feel like I’m usually the voice of the people. The judges, however, I sometimes refer to as a bunch of crack-smokers. However, our experience with the clothes is static. I always say I don’t know until I see how a garment moves on the runway.

What are some of your high and low moments on both the shows?

Season 1 when we went to the grocery store and I’m watching Austin Scarlett fill up his cart with ears of corn. On top of the corn, he piled on bags of chips. I asked about them and he said they were, “For the ride home in the van!” The low moments are the mentor challenges. It’s the tailoring, specifically. There is a chasm like the Grand Canyon between mens and womenswear. They’re different worlds. Womenswear designers doing menswear? You may as well ask them to start speaking Mandarin.

You’re such an incredible mentor. Who has mentored you?

I had really good faculty members when I was an art and design student in the last part of my education whose style I’ve tried to emulate. It’s all about nurturing and cultivating, believing in the possibilities. Assume everyone is innocent until proven guilty. In terms of my fashion life, Diane Von Furstenberg has been incredible. She is so grounded and she always says to me when I’m at an impasse, “You have to be true to be who you are. Listen to your own voice. Never lose your voice as an educator. It’s who you are, what you are. Don’t stray from that.” We all have our moments when we need someone.

Want to be the winner of the beauty must-haves from Olay, Crest, and Head & Shoulders at Walgreens? OBV. Here’s how to enter. You gain an extra entry for each of these things you do, so do ’em all!

That’s it! This giveaway is US-only and ends Monday, March 17th at 11:59pm. The winner will be announced on this post on Tuesday, March 18th. Good luck!

Tell me: Are you also a Tim Gunn fan?