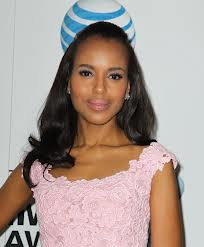 At the 44th annual NAACP Image Awards, “Scandal” star Kerry Washington stunned with gorgeous hair by celebrity stylist Marcus Francis, using products from Carol’s Daughter. “Kerry’s Oscar de la Renta gown made a statement both with the pastel colors and the dramatic train. I wanted to keep the look soft and feminine, so having her hair half up with the clean texture created by the Carol’s Daughter products helped achieve that look while making it modern,” said Francis of the look he created for Washington.
Here’s how Francis achieved Kerry Washington’s hairstyle.
What do you think of Kerry Washington’s hairstyle here?