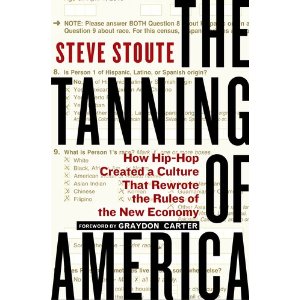 Former music exec, advertising exec and current CEO of Carol’s Daughter Steve Stoute wrote an amazing book, The Tanning of America: How Hip-hop Created A Culture That Rewrote the Rules of the New Economy that comes out  today. The book’s actually about the very theory I’ve been subscribing to since the early ’90s when I discovered that due to the fabulosity of the ’80s being literally killed off by AIDS (which had just become discovered as a deadly disease), we turned as a collective to the music of the time for fashion inspiration. Music of the early ’90s was amazing–but not necessarily so fashion-forward. We ALL dressed like garage bands from Seattle OR like our favorite hip hop star. ALL OF US. My entire high school looked like Salt ‘n Pepa meets Kurt Cobain. It was a stunning display of music’s influence on pop culture–and pop culture gave way to CULTURE. Read on

In the book, Steve draws from his diverse background in the music industry and brand marketing to chronicle how an upstart art form–street poetry set to beats–came to define urban culture as the embodiment of cool. Stoute’s understanding of how hip-hop morphed into mainstream culture enabled him to relate to a new generation of thinking which catapulted him to the forefront of pop culture–where he remains today.