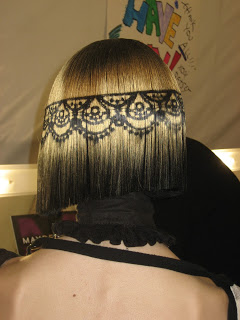 Betsey Johnson‘s Fall 2011 beauty concept boasted, as is Betsey’s way, a lot of look! Peter Gray for Redken created a crazypants stenciled wig look using gold color spray. Get into it and read more below.

Hair: Lead stylist Peter Gray for Redken worked with Sassoon-inspired black wigs, cut to just about chin-length in an asymmetrical bob adorned with very Cleopatra-esque bangs. He also shook up the look by shooting gold hair color spray on a “stencil” of lace onto the wigs. Said Gray, “In addition to the Sassoon influence, thanks to his movie coming out, Betsey also steered me in the direction of Uma Thurman in ‘Pulp Fiction.’” A simple bob is not “Betsey” enough for Gray, as he wanted to create something really special. Lace is all over the collection, so he decided to incorporate the look onto the hair. Explained Gray, “We initially wanted to paint the lace onto the hair, then we evolved the idea to spray paint, then we settled on the hair color spray and used the lace as a stencil.” Under the wigs, Gray prepped by wrapping the models’ hair up using Redken Align Ultra Straight Balm 12 blown through to flatten it. To create a tight ponytail on the crown. Then, take off the elastic, section it and wind it down on itself. “If you have a ton of hair, it’s still easy—you only run into issues when the texture is anything but straight,” Gray advises. “You may want to blow-dry it first, then flatiron it.” Lastly, after the wigs were painted with the lace stencil, he applied Redken’s new Shine Flash 02 to the wigs for extra gleam. 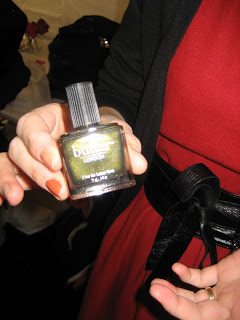 Nails: Nonie Creme created a custom mix of olive-gold Butter London polish for Betsey Johnson’s Fall 2011 collection. “I was inspired by a patina’d, kind of tarnished brocade,” said Creme. She also drew ideas from the fabric textures and, funnily enough, the royals. “The shade is called Wallis, for Wallis Simpson,” Creme specified. “ I’m having a royal moment—it’s all about the royals next autumn!” Butter London’s Wallis shade will go into production fall 2011. Explained Creme, “We wanted a vampy effect without veering into typical red territory.”

Makeup: Makeup was keyed by Charlotte Willer for Maybelline. Said Willer, “Betsey has a very specific idea of her girl.” Explained Willer, “She wants her sexy, strong; an extension of herself.” Willer deviated from a typical black shadow, in favor of a midnight blue with gold combo, which was dramatic, if a bit reminiscent of my high school’s pep rally colors. The shades were selected from a Maybelline Eye Studio Quad is Midnight Excitement. Navy gel liner defined both the top and bottom lashlines. Maybelline Volum’ Express The Falsies Mascara was brushed onto the lashes, while Maybelline’s high-shine red lipstick in Catwalk Red completed the look. Skin was evened out with Maybelline’s new Fit Me Foundation. Brows were darkened with Maybelline Define-a-brow in Black to match the wigs.