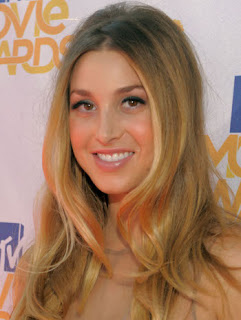 Makeup artist Amy Nadine did Whitney Port‘s makeup for the 2010 MTV Movie Awards. I loved her hair AND makeup concept–in my mind, it was totes a Valley of the Dolls throwback. I.e., my favorite KIND of hair and makeup party. The makeup breakdown, in Amy’s words:
Because Whitney’s Yigal Azrouel dress was such a statement dress, I wanted to create a beautifully soft make-up look that wouldn’t compete. On her face I applied Giorgio Armani Face Fabric Radiance in #1 and Giorgio Armani Loose Powder in #0. For her eyes, I used the lighter shade of COVERGIRL Smoky ShadowBlast in Bronze Fire all over her lid, then contoured her crease with the darker shade.
I drew a thick and heavy line on her upper eyelid with COVERGIRL LiquiLine in Black Fire for a 60’s Madmen-inspired eye and paired it with extra coats of COVERGIRL LastBlast Fusion in Very Black on the top lashes. Whitney applied COVERGIRL LashBlast Length in Very Black on her bottom lashes for added definition. I then sculpted her cheeks with COVERGIRL Simply Ageless Sculpting Blush in Plush Peach on the apples of her cheeks then finished the look with Obsessive Compulsive Cosmetics Lip Tar in Hush.
GORGE. What do you think of Whitney Port’s 2010 MTV Movie Awards look?
Like this post? Don’t miss another one! Subscribe via my RSS feed.