*WARNING: If you haven’t yet seen the LOST series finale, don’t READ this, for the love. It contains major spoilers* 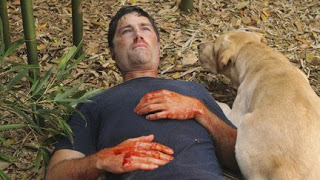 It’s been an epic journey, hasn’t it friends? My initial reaction to the series finale was one of total anger. It then turned to a vague acceptance. I think it ended poignantly and movingly–but it just wasn’t RIGHT. I’m so disappointed. I’m a cult fan. I read Bad Twin. I’ve spent time researching the De Groots. I’ve involved myself in The Lost Experience. I know who Rachel Blake is. I’ve spent hours analyzing literary allusions the writers made. I checked out that canonical site about how yellow labs are magical. But in the final analysis, I have to use the epic words of Whitney Houston: It’s not right, but it’s okay. I’m gonna make it ANYWAY.

Keep in mind this is my opinion. I’m aware that many people loved it and thought it ended perfectly. Feel free to comment and tell me why you loved OR hated the finale in the comments.

My immediate interpretation of Christian Shepard‘s convo with Jack about how they were dead was that they died IN the initial plane crash. My mother actually believes this is what happened and thinks the finale was excellent–despite LOST‘s leaving so many questions and sub plotlines unanswered. We disagree. Conversely, while I’ve somewhat made my peace with the show’s (in my opinion) fairly anticlimactic ending, my brother, the ultimate Lostie, remains livid. I believe that the stuff on The Island really happened but I’m confused as to what exactly happens once everyone was “activated” in purgatory/Sideways World. I believe that everyone came to Sideways World/purgatory once they died respectively. For Kate, I believe it was long after. Hurley and Ben seemed to have spent a long time together on The Island, as referenced by their “number 1/2” conversation. I think Jack was in Sideways World for a long time and I really like the concept of everyone agreeing to wait for each other and meet there so they could be together one last time. I may write more later about my interpretation of the finale’s events specifically. But for the moment, I want to talk about my reaction to the show as a whole and what I liked and didn’t like.

Unanswered Questions
There are several outstanding mysteries I’ve literally spent hours researching and thinking about in nauseating detail. And I’d counted on LOST to resolve them. I feel totally let down that they haven’t, honestly. My theory (my last LOST theory) is that it’s all chalked up to a case of massive senioritis, to quote my friend Karen Robinovitz. The writers swore they had a plan the whole time–and I believe that, in the sense that they had a broad outline and knew how the final scene would go. But for me, it was really a play in 12 acts. Acts 1-7 were fantastic, as was 12. But 8-11 were total filler. For that matter, the first hour of the finale was totally a waste of time. I’m sad that I was duped into thinking they had it all mapped out from the beginning. Lest you forget, LOST was extended an extra season. And it shows. While even the worst episode of LOST is better than the best episode of anything else I’ve ever seen–I just feel the show embodied a ton of missed opportunities in the last two seasons. I really believe the lack of answering questions is more about laziness than my own need to “let go.” A brief run-down of SOME of my unanswered questions, about which I’m irate:

What I Liked
In essence,  it comes down to being about the spiritual, and how the people/relationships you make are the most important. That resonates with me, and I believe in its truth. Carlton Cuse and Damon Lindelof showed us, via Jack that in the end, it’s all about being a man of faith, not a man of science. (Sidenote: Check out this very germane Jackson site that goes into more detail about the religious imagery/decor of the church–thanks to my gal Kristen for passing it along). Love, don’t analyze. I find that deeply profound and it was a really bold takeaway for a network TV show–it treads into mystic territory few other shows would dare to touch. I thought the significance of having the show end the way it began was arrestingly poignant. I loved the iconic closing of the eye–an oft-used LOST image. Showing us where Juliet’s consciousness was when she was dying and muttering about going dutch was GENIUS. I loved that Vincent comforted Jack in his death. I loved that Jack’s time on earth ended nearly exactly once he’d made a complete transition from a man of science to a man of faith. His journey of self-awareness was pretty amazing. I thought it was unbelievably powerful that the man whose catch-phrase was “live together, die alone” found through spiritual enlightenment that you actually die together, as well. I’m not even religious, but that really worked for me.

What I Didn’t Like
But I consider myself a woman of faith AND science. For me, the fact that everything in this show MEANT something was exciting. It was so well written that there were tons of layers to discuss, to unlock, to further enjoy beyond the surface–even in its finale, there are several interpretations of EVERY scene. Each question raised throughout the series provided an opportunity for research and to learn something new. But to leave so many major plotlines to dangle–well, that’s just bad editing. As an editor AND a former literature major,  it pains me. It’s clear that some of the plot was made up on the fly. And they just plum never got around to a bunch of it. Perhaps because the chief writers were commissioned to work on movies such as Star Trek. I believe in the general message of faith. But I find it hard to believe that Damon and Carlton don’t think it’s important to address that certain aspects rife with meaning weren’t wrapped up. And to brush it under the rug in the name of “letting go” just seems insane. It especially upsets me because in the four years I’ve been a LOSTIE (I started watching DVDs of the first two seasons after season two aired, at the incessant urging of my Trekkie/Lostie brother), I’ve converted several people to the Cult of LOST. And I feel I’ve let them down in a way that there are so many things still up in the air. Even worse? All those people I unsuccessfully converted were RIGHT when they claimed the show moved too slowly without clearing things up. “Wait until the end!” I promised them. Who had the last laugh? Not me.

That said, I loved the show and truly believe it changed television forever. I just am disappointed that it ended the way it did when it could have been AMAZING. In short, LOST, I thought I had somebody (or some show) down for me. It turns out… you were making a fool of me. (To a degree). You know. In the words of Whitney.

What did you think? Tell me in the comments!

9 Comments → LOST Series Finale Review: Was it Really Worth You Going Out Like That?