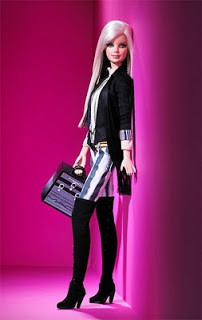 The What’s On Your Vanity Series showcases a single beauty item a blogger loves because it’s effective, but also she feels she must keep out on top of her vanity because the gorgeous packaging must be displayed.

Look. The undisputed nail enthusiast of the WORLD is Michelle Mismas, who writes the fantastical All Lacquered Up. If you’re not involved, GET involved. Her site is my go-to resource for all things talon–I was truly riveted by her review of CND Shellac, the brand’s new UV gel/nail polish hybrid. Interestingly enough, Michelle’s dresser isn’t topped with polish bottles, it’s topped with two very spesh dolls. In Michelle’s words:

Like a lot of women I use my dresser, which substitutes for a vanity, to display my favorite perfume bottles but what flanks those bottles are my two, yes TWO, MAC Barbie dolls.  As a child I was a total girly girl and completely obsessed with Barbie.  It got to the point that my parents converted the spare bedroom into Barbie-land complete with her Dreamhouse, Townhouse, pool and stable of cars and accessories.  It was utterly ridiculous yet totally fantastic and my parents still have all of it in storage. TRUTH!

So a few years back when rumors started swirling of a MAC/Barbie collaboration I willed a doll to materialize and sure enough she did though her appearance wasn’t what I expected.  Go to any MAC counter or take a peek backstage during Fashion Week and you’ll see the typical MAC Artist dressed head to toe in black.  How MAC MUA Barbie ended up wearing striped trousers is beyond me!  She’s still totally fabulous with her thigh high non-hooker boots and MAC train case (something I want someday).

Anywhoodle, I remember the day I brought my Barbies home like it was yesterday.  It was a cold February morning.  The snow was coming down and schools were closing around town yet my Barbie loving ass was determined to get downtown and acquire a doll. Fortunately, my boyfriend works in the same building where the MAC store used to reside and I had him scope the store out on his way in.  When he called at 7:45am to say that there was already someone in line, I scurried downtown sans shower (don’t judge!) to wait in line with the other Barbie fanatics.  I had so much fun chatting with the employees who took the morning off to wait for a doll that the time flew by.  Right before the store opened, I called the boyfriend downstairs and we were both able to purchase a Barbie and they now live, in their boxes never opened, on my dresser to greet me when I wake every morning.