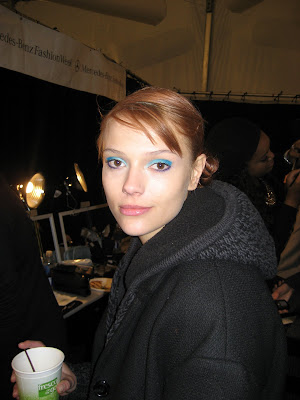 While this look is GORGEOUS, isn’t it just a tad reminiscent (in a GOOD way) of Mimi of The Drew Carey Show fame?

Hilarious, right? Lead makeup artist Makky for MAC (it was DESTINY that he work with makeup with a name like that, n’est-ce pas?) headed up the makeup team backstage at Tibi. There’s a LOT of eye going on, and I love it. In fact, I just about flew over to the makeup station to find out WHAT was happening with that turquoise eye I could see from across the room. Makky drew from a Pantone palette of bright blues with an ’80s vibe. “The Christy Turlington in ’80s VOGUE era,” explained Makky. He managed to keep it from being too retro Barbie, though. There need only be one Barbie show this season at Fashion Week.

To give the eye a futuristic vibe, the shadow was neatly “boxed off” by chopping off the excess shadow at the ends, lending a geometric effect. Victor Cembellin, MAC makeup artist who was on hand backstage told me that you can simply use a Q-tip dipped in makeup remover to remove shadow in a flash JUST where you need to. 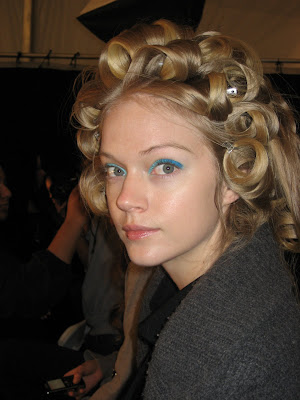 The products involved: Makky mixed a sky blue mixed with aqua shadow over a cobalt purple (like a cobalt blue mixed with purple) shadow before layering MAC standby Electric Eel Shadow (part of my makeup collection, and probably yours, too) on top of it all. The effect was a kaleidescope of blues that were saturated, not powdery. MAC’s new Tinted Lip Conditioner in Pink Fish from the Hello Kitty collection was slicked onto lips. Skin was primed with MAC Face and Body Foundation and Studio Sculpt Concealer. The result was a dewy, beautiful canvas. No blush was used (“too circus-y,” said Victor), and lots of mascara was applied to the top and bottom lashes. 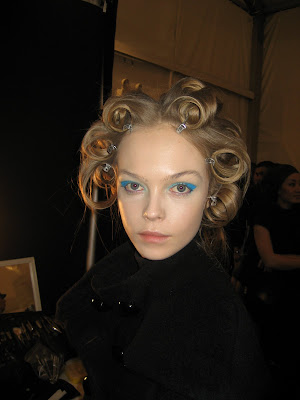 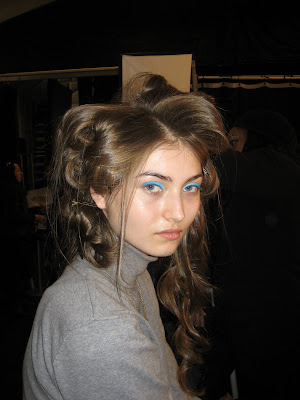 Hair was headed up by my FAVE backstage buddy Kevin Ryan for RSessions, but he was a bit busy this time, so I chatted up his business partner, fellow Philadelphian Frank Rizzieri who gave me the deets on the look. Using their Pin-up Girl Kit (see below for pics) to be sold at Ricky‘s, Kevin instituted a look based on Dr. Zhivago. The effect was very Breck Girl With a Bit of Hat Head, with a ponytail just on the brink of falling out. The elastic was pulled to the last three inches of hair. To achieve the look, hair was prepped with Bumble and bumble Surf Spray, teased along the crown, and then curled with a curling iron and secured into pincurls. A deep side part was created before the hair was pulled back into a loose ponytail. 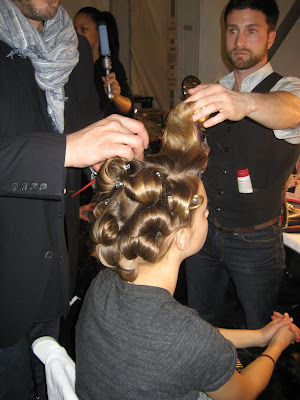 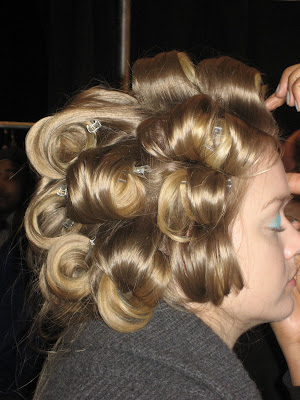 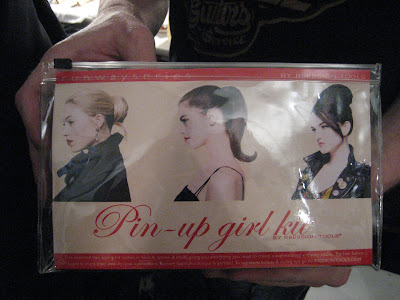 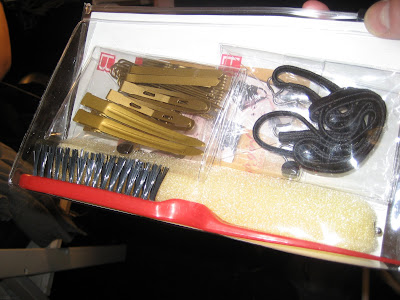 The pin-up girl kit! I will DEFINITELY be investing in one of these. That tiny, skinny-handled brush is absolutely ubiquitous backstage at Fashion Week. Why don’t I have one?

Read my coverage of Tibi backstage in September 2008 and February 2008.