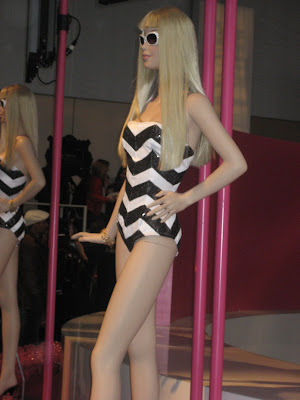 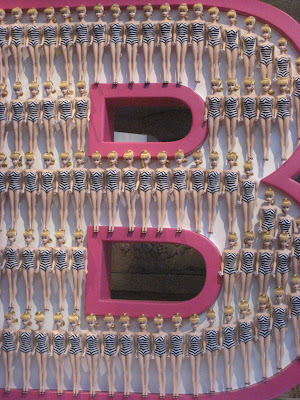 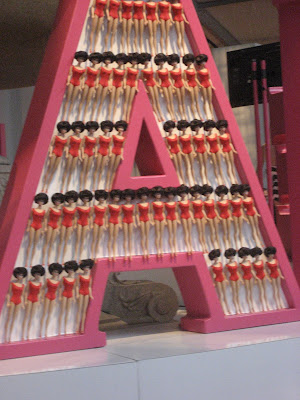 You guys. Barbie is DTM. Dead to me. Let me tell you why. Daneen and I waited in line for the Barbie show for an HOUR. AN HOUR. Check out the pics from the Barbie display inside the tents, above. The line was epic. We had tickets, mind you. But the line. Even the super-cute Fashion Week security dude, Russell W, couldn’t distract me from the fact that seemingly, every single person in Manhattan was in the tents and in front of Daneen and me in line.
At one point, things got confusing and there were several people who got plucked out to go stand in the “standing room section” to wait to be let in and people with CHILDREN were summoned to go on into the show whilst real, full grown women – who APPRECIATE a Barbie show more than, say, a Barbie DOLL were forced to stand stationary in heels till the end of time. Fashion Week and children do not mix, dolls. Children should see Barbie at Stars on Ice, or whatevs. Fashionistas and beauty junkies deserve to see models dressed as Barbie’s past, present and future iterations in couture. All of a sudden, after an hour of waiting and without any communication from the security powers that be, we were at the front of the line and the flat screen TVs adorning the tents began showing the Barbie show. No one even TOLD us we weren’t making it in. From what I could see on TV, the show was DIVINE.

I haven’t been this disappointed by Barbie since I didn’t get a Barbie and the Rockers doll that I COVETED circa 1987. Barbie, we’ve had a long run. I received my first doll when I was four, 24 years ago. But it’s OVER.