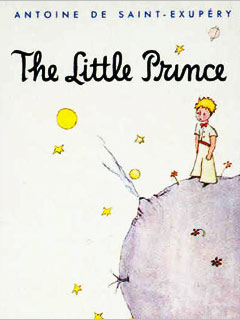 The title of this post is courtesy of my friend Sally who hilariously pointed out that Abbadon and Walt are TOTES MIA and have been for the entire season thus far. Also, men of color don’t seem to have a good track record on the island. See exhibits A-D: Eko, Yemi, Michael and Bea Klugh, who’s obv not a guy, but still, WTF?

The episode’s title is The Little Prince, obv, a nod to the eponymous book read the world over by young French language students (myself included, obv). In The Little Prince, French aviator Antoine Saint-Exupéry (the author) begins with a pilot being marooned in the desert in a damaged aircraft. Saint Exupéry himself was marooned in the Sahara (although at the time, his location was not known to him) for four days until he was rescued by a Bedouin. Let’s discuss also: Aaron resembles the Little Prince looks-wise. Check out Doc Jensen’s far more in-depth coverage of The Little Prince parallels in his February 4 column. This excerpt is especially interesting:

Consider the broad strokes of The Little Prince‘s plot. Spoiler alert! After a series of stops on other meteorites, the Little Prince is marooned on Earth. He is full of regret. He now realizes he should never have left his meteorite and his complicated little flower. At one point, the Little Prince learns from a wise fox that ”you become responsible for what you’ve tamed.” The fox explains that these tamed ”things” are your friends — the people who’ve come to trust you, love you, and depend on you because of the amount of time you’ve invested in their lives. In the final chapters, you get the sense that the immense distance from the place where he truly belongs is literally killing the Little Prince. As the troubled hero’s wisdom and maturity grow and his existential/physical crisis intensifies, I get a strong whiff of Jack — especially when you reach the part where the Little Prince makes a risky pact with a deadly, duplicitous snake (read: Ben) that will resolve, once and for all, his homesick alien blues. Might this conclusion foreshadow — thematically or literally — Jack’s (or someone’s) ”Return to the Island” story line? Something to consider over the next few episodes. Do you love it? I do.

I predicted when we saw the light in the forest that it was from the hatch and that the screams were Claire giving birth. All of this gives credence to Doc Jensen‘s prediction that whispers are indeed the losties running into their former selves and speaking amongst themselves trying not to disturb them. I was unimpressed with Locke‘s “knowledge” that he knew “when” they were to the day simply because he saw the hatch light. Wasn’t it implied that Desmond used that sunlight-simulating lamp on a regular? Just because Locke saw it on that one night (which happened to be when Aaron was born) doesn’t mean that that was a one-time experience. I’m under the impression that happened any time Desmond was up and about, which very well could have been deep into the night. Any time the dude turned on a lamp, that beam of light would occur. What do you think about that? I think it’s a rare instance of sloppy LOST writing/incontinuity.

Every time Dan Norton was being chased by Jack and Kate, I envisioned them cornering him and instead of asking him who he was working for, I pictured them asking him how we as a people in a world could possibly get ABC to put My So-Called Life back on air. BT dubs, I think the name Norton (and we know names always mean something on this show) is a nod to the Norton Anthology, with which any college lit major should be familiar. The tome includes a cluster of texts which an overview of prose, poetry, essays, and drama. Much like LOST‘s references themselves, n’est-ce pas? Claire’s mother emerged as per ush from the shadows as she opened the door once again in the rain.

The French scientist brigade crashing on the island 16 years ago scene was GENIUS. GENIUS. I like that they didn’t cast the actress who plays Alex as Danielle Rousseau, but I don’t love whom they chose. She seems too young to be playing a 16 years younger Rousseau, right? I mean, granted, girlfriend’s been exposed to some SERIOUS elements (the perils of not packing your CHANEL Sublimage, right?) but she must be about 37 AT LEAST right now. And so, she must be about 21 at the youngest when she arrived on-island. The girl they have playing her looks about 17 and just doesn’t look like Rousseau. I have to give the casting director a feh on that one. They could have done better.

YAY FOR JIN, he of two walking cheekbones fame! I was wrong about my prediction (which normally I’d HATE, by the way… but if Jin being dead is wrong, I don’t want to be right.) Was the final scene not SO reminiscent of Sixteen Candles’ Long Duck Dong’s confusion post high school party bender when his foster parents find him “sleeping it off” outside on the yard? Poor Jin. Also, I was pretty relieved that the French group spoke English. I mean, the dude goes to such trouble to learn a foreign language and suddenly he’s marooned (in space and time) with a gaggle of French scientists? 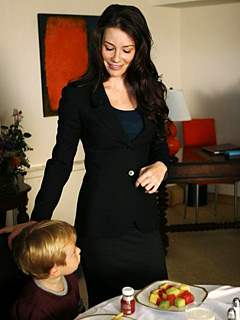 Lastly, I think Kate looks THE BEST SHE’S EVER LOOKED in this episode. Her eye makeup and hair are flawless. Even Sun’s suit fit her perfectly. I’m going to try to figure out EXACTLY what her hair procedure/concept entailed. I’ll keep you posted, obv.

See you next week, LOST fans! And don’t forget to tell me what you think in the comments.

4 Comments → LOST Analysis: Can I Get a Black Guy?