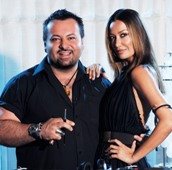 “Not to prime is a crime!” –Napoleon Perdis

One of my fave makeup artists, Napoleon Perdis, is changing the face of reality television with TLC’s new ten episode, one-hour docudrama series, Get Your Face On. The series premieres Monday, December 8th at 7AM and goes through Friday, December 19th. It will last marathon-style, showing every weekday.

The show follows the international phenomenon as he searches for his protégé. The competition will feature 12 aspiring makeup artists who will compete for the chance of a lifetime in the cosmetic industry. Throughout the series, the artists will learn the tricks of the trade under the guidance of the makeup mogul.

4 Comments → Napoleon Perdis’ Beauty Face-Off Series: Get Your Face On