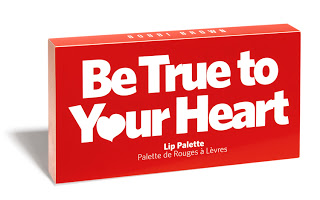 Bobbi Brown Cosmetics has created a limited-edition red lip palette in partnership with The Heart Truth campaign and its annual Red Dress Collection Fashion Show. The palette was created to raise awareness for the campaign and its message that heart disease is the #1 killer of women. The show, of which Bobbi Brown Cosmetics is also an official sponsor for the third year in a row, brought Hollywood’s leading ladies together on one runway at “The Tent” at Bryant Park during the Mercedes-Benz Fashion Week on February 1st.

The Bobbi Brown Lip Palette includes Bobbi’s own favorite lipstick shades in a range of neutral and deep utterly wearable colors. Shades include Mauve Lip Shimmer (my personal fave of the four), Kir Lip Shimmer, Cranberry Lip Sheer and Slopes Lip Color. Only 500 of these limited-edition palettes, featuring a specially designed package and the tagline “Be True To Your Heart,” will be available on BobbiBrown.com for $40.00. The palette also includes a mini Lip Brush.

Snap one up before they’re gone, dolls! Limited edition items that also benefit a good cause? What’s better than that?