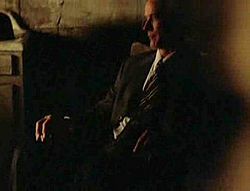 Thank the LORD that LOST is back on. I simply couldn’t live without it another day. BTW, the first thing you should do the morning after a new ep is aired is read Jeff Jenson’s article on it in Entertainment Weekly. The man is GOLDEN. He is a genius who gets every literary, cinematic and even scientific reference. He knows his stuff. He is the one who pointed out that Minkowski, the name of the guy on the other end of the phone in last season’s finale “no doubt, is a nod to Hermann Minkowski’s theory of four-dimensional space-time, which has inspired many Lost theories.” That’s impressive.

Usually I watch the new episode and then watch it once more right afterwards on DVR. I’m that kind of loser. This time, I watched the episode in the “LOST bar” that is a fantastic venue for viewing because while it’s difficult to get a seat (I got one in back of a dude who was wearing, no joke, a Dharma Initiative khaki jumpsuit a la Roger Workman. Can you even? I immediately told him I was OBSESSED with his outfit), everyone gets free drinks when someone on the show dies, AND free shots when anyone says “The Others.” What’s better than that? My friend Lauren and I have made this a new tradition since thoroughly enjoying last year’s finale experience there. The only problem is that I can’t obsessive-compulsively call my brother to discuss every detail during the commercials and then rudely hang up mid-sentence, dismissing each other with, “BYE! IT’S ON!”

My theory for The Oceanic Six: Obviously, Jack, Kate and Hurley, but I think the others are Sun, Claire and Sawyer. We’ll see what happens. I have a feeling Jin is the one who dies while they’re still on the Island (there was a commercial showing Hurley at a grave site that I’m pretty sure was on the Island). I also wonder if maybe the “future” to which The Oceanic Six have returned is an alternate reality? Jack, Kate and Hurley seem mysteriously misplaced and things just seem off for them, especially for Jack, of course. Why would Hurley want to return to the mental institution? Is that the only familiar place he has left? What happened to his family? Is this a sort of Back to the Future 2 situation, as in when Marty McFly returns to his house only to find it inhabited by another family who attempts to shoot him?

Creepy Matthew Abbadon, the suited dude who says to Hurley, “Are they alive?” is a reference to Abbadon, the name for the angel of the Abyss in Revelation. This angel does the work of God in binding Satan and hurling him into the Abyss. Could the “Abyss” in this case be the Island? Matthew seemed intent on kidnapping him to get him to come back… I’m wondering if this is so that Hurley can help him locate the 815 folks who weren’t saved, i.e., not the Oceanic Six. Could Abbadon be one of the “NOT PENNY’S BOAT” guys? I’m leaning toward that as opposed to a creepy Other. And WHERE is Eyeliner Richard? And whose eye is it that we see when Hurley finds the (apparently mobile) Jacob Shack? Can you BUH-LIEVE Christian Shepard is its new resident? Is he Jacob? So many unanswered questions. Is he assuming Christian Shephard’s body? I’m thinking yes.

What somewhat disappoints me about the new flashforward format is that the show seems to be less rich with literary allusions. I’ve kind of got nothing analysis-wise… other than the biblical references. There were biblical references for sure before, but they were interwoven amongst other literary references as well. I also have the feeling that the premiere was supposed to be two hours, but was bisected due to the WGA strike. It felt a little incomplete to me for a premiere. And, we weren’t WOWED the way we were with the discovery of Hatch Inhabitant Desmond, or the fact that The Others hold bookclubs in a darling condo community. That said, I still adore the show and thought it was well done and certainly ignited my 8 months without LOST-starved theory production.

Oh, and I loved the Gym Class from Hell Scene where the tribe splits between Jack, the Man of Science and Locke, the Man of Faith. How does Hurley get off the Island if he chose to go with Locke? And I LOVE snarky Ben-on-a-leash’s comment that he’s “going to go with Locke, if it’s all right with Jack.” Hilarious.

The real question which my friends Lauren and Carrie and I debated at length is this: does Matthew Fox look better soaking wet from the rain and scruffy on-Island or does he look better clean-shaven and in a suit prepared for surgery? To quote Natalie Sands from the epic Girls Just Want to Have Fun, “Decisions are the worst.”

Feel free to comment/theorize away in the comments section! Be back with a beauty review later today.

5 Comments → Who are The Oceanic Six??