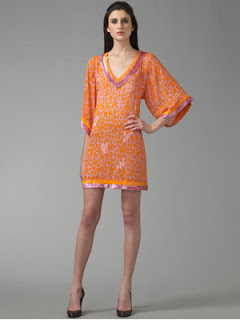 I KNOW. Can you not picture wearing this divine dress and standing on a balcony in Positano? Blumarine is my FAVORITE designer of the Fabulista Can’t Afford It category. In fact, dresses like this are the reason I am a beauty expert instead of a fashion one. Even at its most expensive, beauty rarely tops $800. Fashion is infinitely more costly. This dress for instance, costs a cool $2810. For that much, you could GO to Positano. Do you see the heartbreak involved with fashion blogging? I don’t know if I can handle it. Sigh.

Do you know about Blumarine? Here’s some info courtesy of Wikipedia:
Blumarine is a fashion company that was created in 1977 in the town of Capri in Italy by Anna Molinari and her husband Gianpolo Tarabini. The late designer Franco Moschino also helped the company develop a “look” of edgy romanticism. This look has been continued by Molinari, who remains the company’s chief designer.

The name was inspired by Molinari and Tarabini’s favorite color and their love for the sea. The Blumarine fashion line debuted in 1980 at the Modit, a small fashion premiere in Milan. In 1981 the fashion line was featured in the first fashion show during fashion week. Both times, it was met with success. During those times, there were only a few items.

I love Italian designers the most, despite my Francophile status. If you’re lucky, you can find some slightly more reasonably priced Blumarine duds at Century 21 in the designer section. I’m going to keep my eye out for this dress… it’ll probably appear at Century 21 by 2010. But I have a feeling that even then, it will still serve as the Johnny Depp to my Tim Burton.