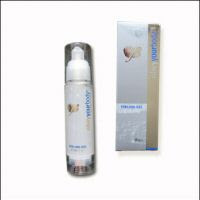 There is this kiosk in the Montgomery Mall (outside Philadelphia) where both my brother and mother have been suckered into buying these Israeli dead sea products called Obey Your Body (product impulse buys run in the fam). My brother once gave me this manicure set that included the best files I’ve ever used and this phenom body/hand lotion. My mother on a separate occasion purchased the same one unwittingly. Now the sales people are pushy but they demonstrate the use of the products on you mid-mall and I have to say that when I’ve tried them out at my parents’ house, I’m WILDLY impressed. I stay far far away from the Israelis at the kiosk for fear that I’d buy the entire place out. Not only do I adore Israelis, but I have a serious penchant for products made from the Dead Sea. In fact, when I was IN Israel, I had a serious case of eczema that completely disappeared after a cold February dip in the Sea.

But Obey Your Body’s Peeling Gel blows their manicure kit (and all blackhead eliminators I’ve tried thus far) out of the WATER. This gel, which I could only find online in this set, has converted me from Biore. I tried it out only on my nose initially, where I had a colony of pretty vomitatious blackheads (although less vomitatious since my facial in late October at Shobha). You leave it on for a minute, then it beads off ITSELF and you simply scrub it in a bit and then wipe off any excess with a damp washcloth. You can actually SEE dead skin and clogged pore innards IN THE SINK after you scrub it off. Is there anything more satisfying? I immediately used it all over my face once I saw how well it works on my nose. The more clogged pores you have, the more “beads” the gel produces. My never before facial’d brother’s sink was covered with gray “peels”. Totally gross, yet I stopped what I was doing to watch him exfoliate them on out. The bottle says it’s to be used once a week, but I’d say it’s safe to use twice a week. I’m planning on buying it IMMEDIATELY. It’s $30 (if you bargain with the people at the Montgomery Mall – the kiosk is in front of Forever 21) or $39 if you order it by itself online.

Merry Christmas to my Internet friends!