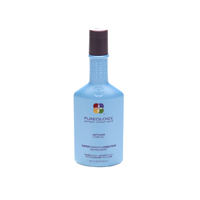 First: I’ve noticed funny changes I’ve made inadvertently in the five years since I graduated college. Five years ago, before I got a job and was still looking for one, my roommate J and I would dress up in suits to go to happy hour during the week to look uber-profesh and important. Now, I’ll do anything–change at work, stop quickly at home, whatever–to avoid looking corporate when I’m trying to enjoy a cocktail. Also, pre-graduation, summer always included at least one of Dave Matthews Band’s concerts at Philadelphia’s Vet stadium. Now, not only is the Vet no longer in existence, but I’m settling for some vintage DMB on my iPod during the walking portion of my commute. What goes ON.

Anyhoodle. My new shampoo/condish must have is the PureOlogy SuperStraight Smoothing System. I haven’t used my straightening iron at all in the last week during the humid, 90-degree plus heat AND the transportation debacle slash nightmare that was yesterday morning. The products are both ZeroSulfate salt-free, and include a color-preserving formula. When combined with my Bespokes Labs T3 dryer, my frizz was abolished, my curls were nowhere to be found, and humidity? WHAT humidity? It plum had no effect on my hair. It also cuts drying time–with the Bespokes Labs T3, I spent 7-10 minutes blowing out my hair. Amazing.

The fact that PureOlogy is salt-free and alcohol-free surprised me–I had no idea that salt was showing up in my shampoo. But it makes sense, both salt and alcohol have dehydrating properties. Demonstrably, the lack thereof yields a smoother, more hydrated, color-protected mane. The third part of the system, the straightening serum, works wonders as well. The only thing I’m not in love with about the whole system (of which I used all three components and like them–aren’t you excited about that?) is the scent. My friend L also tried out PureOlogy SuperStraight a few weeks ago and described it as “a Phish show”. It smells herbal, veering into hippie territory, but not so much that you need to bust out the patchouli. The scent also fades after the first couple of hours after you wash your hair.

The best part: it will leave your hair so smooth, that if you don’t want to blow-dry it straight and have semi-wavy hair, it will give you loose silky waves and leave no frizz. It’s priced at $20 each for the shampoo and conditioner, but it’s so worth every penny that I’m ready to “bounce around the room”.

4 Comments → Salt and Alcohol Wreak Havoc on… Your Hair?