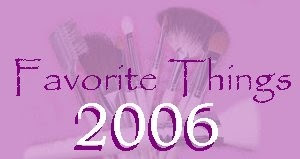 1. CO Bigelow Mentha Lip Shine
Not only the best of 2006, but I’d go so far as to say it’s the best of…whatever we’re calling this decade. Every single person to whom I’ve introduced this minty, balmy yet glossy wondrous tube of fantasticness has purchased one within one week. I prefer #1138, the sultry clear red gloss. I currently own about 6 tubes and have thoroughly finished about 3 tubes. Just in 2006. Okay?

2. The Gillette Fusion
Women’s razors just don’t work the way I want them to. My mother is happy as heck with a flicker and I still don’t understand how she removes hair with a circular wire-wrapped razor. I’ve tried it and after a shaving, I am still feeling the stubble. I progressed to a Gillette sensor for women, which was okay. Then I realized that men’s razors are the way to go. The Mach 3 was good, then the Mach 3 Turbo was better, and now, the best thing on the market is the Gillette Fusion. It doesn’t nick your skin and when combined with some Trader Joe’s Cream Shave, you will not believe how smooth and soft your skin will feel.

3. Blisslabs Lowfat Moisture Lotion for Oily Skin
I fear that this is discontinued because I just purchased it at TJ Maxx and am in love with it but it’s nowhere to be found on blissworld.com. It’s a fabulous, creamy yet oil free lotion for oily skin. Totally fabulous and if I can’t locate it once my bottle is finished, I’m going to have a SERIOUS problem.

4. Neutrogena Oil-Free Acne Wash
This stuff is the reason I have so much less acne than I used to, come PMS time. The foamy kind is a massive improvement. My face simply feels cleaner after I soap it up with a dollop of this stuff. I pretty much have embraced a foam lifestyle in its entirety as I also will only purchase anti-bacterial foaming hand soap from Bath and Body Works of late.

5. Trader Joe’s Cream Shave in Honey Mango
I just adore Trader Joe’s in general, but was even MORE in love with it when I realized they had a beauty section. For $3, you can pick up several. P.S. The scent is DIVINE. As I said before, honey and mango should never be separated again.

6. Lola Blush Stick in St. Tropez
I just purchased on my “Christmas Break” of my own creation and it has now replaced my Tarte cheek tint as my staple blush/tanner. The St. Tropez shade is a perfect blend of BOTH. This is one instance where I’d advocate a 2-in-1. Oh, and? Each shade (Marseilles and Monte Carlo are the other choices)is named after a different place in the French Riviera. What’s better? Not one thing.

7. Laura Mercier Tinted Moisturizer
I prefer this for the summer, but also on days when I’m feeling fairly flawless even in the winter. The oil-free formula is totes wonderful for even, yet sheer coverage. It’s a bit pricey, but so worth it. They sell it at Sephora, check it out.

8. L’Occitaine Sweety Honey Lip Gloss
I have a hard time buying gloss these days that isn’t mentha-fresh, but I will make an exception for the honey goodness that is Sweety Honey Lip Gloss. It’s amazing how the combination of honey and glossiness isn’t sticky and unappealing in the least. Best of all? It reminds me of tea in London at a swanky hotel.

9. Lady Mitchum Gel Deodorant in Shower Clean
I was on a mission for great-smelling deodorant that doesn’t rub off on my clothes and I FOUND it. This stuff smells beyond delish and doesn’t leave a trace on your sweater. I don’t know if it’s “so effective you could skip a day”, but it is effective enough to last an extra strenuous workout at the gym.

10. Bliss Lidstick
I bought this at TJ Maxx as well and will seriously suffer separation anxiety if I can’t stock up on it once my two shades have been worn to little stumps (Otter and Ink). This is perhaps the best pencil eyeliner I have ever owned. It glides easily on the lids and stays put all day. It is very easy to achieve both a very defined line or a more subtle powdery effect. Otter is perfect to use during the day and Ink is the perfect option for a more dramatic effect.

11. Aquafina Lip Balm
Who knew that Aquafina, in addition to water,makes phenomenal lip balm? It rivals even Burt’s Bees. It’s tres moisturizing, yet fruity, yet slightly minty. It comes in a pack of three for like, $2. Buy some immediately.

12. Hylexin
Just get thyself some Hylexin. I just purchased it on eBay last week, started using it on Sunday and already I see a difference in my formerly gruesome dark circles. After reading Real World Melissa rave about it, I had to purchase some. And BT dubs, Melissa is a truly gifted writer. If you watched Real World New Orleans (and what was that, like 9 years ago?) you know how thoroughly entertaining she is. Her blog entries are lengthy, but her unique “language” is so funny that you end up adopting her phrases as your own.

Anyway. I had tried everything for my dark circles. And BTW? On someone as pale as I, dark circles are cute for Halloween, but that’s about it. I bought several concealers, none of which completely alleviated the problem. My favorites are Benefit Boing and Laura Mercier Secret Concealer. Neither eradicated the linebacker look I was rocking, but several applications a day did ameliorate the situation considerably. But who wants to apply several applications of concealer? Not I. I’d also elevated the head of my bed a bit by placing textbooks under it AND made sure to get at least 8 hours of sleep, but these bags were, alas, not sent packing. Since twice daily applications of Hylexin (and it’s only been 3 days mind you), my puffiness and circles are diminished and I finally wake up impossibly fresh looking. Because dolls, dark circles are hereditary, and that’s all there is to it.
The first step to a sultry-lined eyes is a smooth undereye area.

I adore Burberry Classic. So much so that I haven’t worn another perfume since purchasing it last January. It smells almost like almonds and hints of vanilla with some kind of sophisticated berry thrown in. Men cannot keep their nostrils OUT of your neck when you wear it. I’m just saying.

14. Bliss Spahh’kling Body Butter
The minute I found out this gem of a product was produced in “limited reserves”, I was, naturally, all over that. I am the dream consumer, lest you forget. I was able to get it on eBay for only $14.00 (being this addicted to products requires special skill). It arrived yesterday and today, I’m rocking the hell out of it. I was pleasantly surprised by how delish it smells, as Champagne is not a scent I would think would be so appealing. It’s also not quite as shimmery as I’d thought it would be, but it leaves a slight pearly glow. It’s uber-moisturizing, however, as are the other body butters by Bliss I’ve purchased in the last month (lemon-sage and plum plum). Basically, these days, if it’s Bliss, I own it. Also, they have the BEST copywriting team imaginable at Bliss. How adorable is “Spaahh’-kling Body Butter” anyway? They are QUEENS of the double entendre and if there were a beauty product copywriting oscar, they’d be on the receiving end. Another fave: on their liver spot removal product, they inform us it’s good for you if you’re a “liver”. Do you LOVE it? I sure do.

15. Shine Happy
This clear shine treatment is just what the doctor ordered to spruce up color in between visits to the salon. At only $8 a pop, it improves your hair’s condition and texture, visibly glistening. When I used it prior to a night out, people actually NOTICED. And on blonde hair, that’s no easy feat. One word of advice: as you’re supposed to use it instead of shampoo so be sure to use it when you’re hair is not too dirty that using the Shine Happy in lieu of shampoo won’t freak you out too much.

Thanks to Annie of Blogdorf Goodman for organizing!