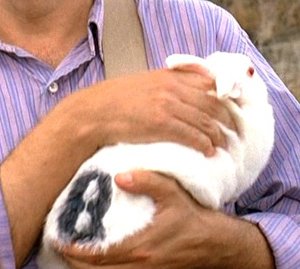 Last night’s episode of LOST was phenomenal. I know it’s not funny at all–but I laughed hysterically both times I viewed the scene with Sawyer pre Pulp Fiction needle session when Ben places the bunny on his stomach and Sawyer goes, “What the hell?” The ridiculousness is palpable. It also has to be said that I’m of the camp that believes that that was the same bunny seen in Ben’s bag at the end. It was pretty wild to see Sawyer painted as a sympathetic character, complete with becoming a Great Expectations style benefactor, and a serious intolerance/aversion to animal cruelty. But Kate, you and I both know that Jack is a veritable feast of alliteration (heroic, hot and hunky), but did you need to tell Sawyer you only said you loved him so the others would stop hitting him? Maybe you could have kept that to yourself just a little baby bit longer. LOVED the Of Mice and Men references with which Sawyer and Ben pelted each other. Sawyer’s jail time was totes reminiscent of The Shawshank Redemption as well. And could they have CAST a more despicable warden? Just the site of him nearly scared the Essie off my nails. Also interesting yet creepy: Ben and Juliet are insisting Jack partake in the activities of children, i.e., eating pancakes and watching cartoons. To psychologically badger him into a primal state of mind pre-island so he’s more apt to abandon his friends and “cooperate” with the Others? Check more about last night’s ep here.

P.S. Did you notice that Ben took Sawyer to the top of a mountain to see the “big picture” that there are actually two islands?